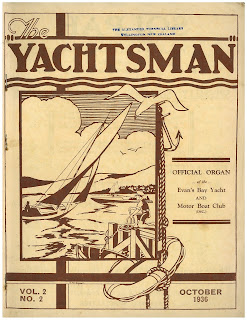 There's nothing quite like a blat across Cook Strait. It's always different and there's always a challenge of some kind or another. Lots of people take their boats across from Wellington to spend a holiday. Sitting around and idly fishing or having parties is not really my thing though - not for days on end anyway. I've always preferred the sailing bit.

If you're similarly inclined, and find yourself pottering about over there with not much to do, you might want to check the veracity of the story below. It is taken word for word from the Yachtsman magazine - a very good publication put out by the Evans Bay Yacht and Motor Boat Club for several years during the mid 1930s. If nothing else, it provides a nice little fireside read.

(Told by "Perry" at whose request all personal names have been changed.)

﻿﻿﻿﻿There is a Treasure Island in Marlborough Sounds with buried gold to the estimated value of 400 pounds. The Island is shown on the charts as Cooper Island and it is situated between Cabbage Bay and Long Island in the Northern entrance. The charts show the island as being without any anchorage or cove, but in this respect they are wrong as I shall show. There seems little doubt but that the treasure still lies where Laurence Crosbee buried it years ago.

Chance led me to the discovery which, aided by coincidence led to our search for the gold and to the tragic death of one of the searchers.

Christmas (1929) we were anchored off the Twins in the Northern entrance fishing. Nearby, lay a small island, so I rowed across to it. On coming close I discovered a cleft or channel in the cliff face with deep water. This led me into a tiny landlocked bay. The entrance was only fifteen feet wide, and being on the angle could only be distinguished on near approach. The island looked as though it might once have been the crater of a volcano. Now, however, it was overgrown with stunted bush. In one corner of the tiny bay was a sandy beach and a few square yards of level land. At the back of this the land rose in sheer cliff to some fifty or sixty feet in height.

﻿﻿
It was Peter who first mentioned the Treasure, having read about it in "Petersen's Adventures in Marlborough". In 1868, according to this old book (printed in 1875) gold was being mined near the head of Endeavour Inlet. Every few weeks the gold was brought into the tiny hamlet of Endeavour to be taken to Picton. One night a considerable sum lay in the small store and Post Office. It was stolen. There was a great hue and cry and eventually suspicion fell on one  "Sailor" Crosby, a ne-er-do-well hanger on who was a boatman during the whaling season. Crosby had a sailboat and was absent for a long time on the night of the robbery. Crosby hotly denied the charge, but was sent to Picton (then capital of Marlborough). He was tried before Mr Justice Grove. Seeing the case go against him, Crosby tried to obtain a release by promising the Court to return the gold which he said he had buried on an island. The scandalised judge instantly sentenced him to 15 years. Attempts were made for a while to locate the gold but , as far as it is known, without success.

As to its correct whereabouts, it was Donald who supplied the final clues. He had been working on the Mount Cook Prison (Wellington) demolition job. During the demolition many strange things were found in those six foot walls. There was scarcely a cell that didn't have its loose bricks with space for hoarding trinkets, letters and diaries. (See Evening Post file for article on these discoveries.) An aquiantance of Donald's, one Richards, working nearby, fished out an old envelope with a letter inside. After glancing at it he tossed it over to Donald remarking that it looked as though a yachtsman had been in the jail. Richards was also a yachting man. Donald looked at the paper which consisted of a letter with a plan on the back. On reading it through later he found that the actual letter had no reference to the chart on the back, which was just the map of an island. Knowing Peter was keen on anything unusual Donald gave him the letter. The letter was addressed to Laurence Crosbee.

It is unnecessary to tell at length how we eventually stumbled on to the fact that Laurence Crosbee, the prisoner in Mt. Cook, was the "Sailor" Crosby who buried 400 pounds in gold, and how it dawned on me that the map on the back of the letter was really a chart of Cooper Island. Sufficient to say we came to the conclusion that the gold was on Cooper Island buried five feet on the beachside of a large cabbage tree. Unfortunately others became aware of our discovery.

Poor Crosbee must have drawn the sketch to aid his failing memory and then died in jail.

﻿
We were able to get away on an evening in February 1931, for the Sounds, Donald, Peter, and myself, in the yawl belonging to Peter. We had a splendid run in the S. E. breeze across the Straits, and reached the Nortern entrance about 6a.m. We took about two hours in the falling breeze to back up to Cooper Island against the tide. When we reached the island the wind had fallen away altogether and we had to tow the yacht into the entrance. The bay was just as I had seen it several years before. the high bush-clad cliffs, the tiny beach - and there, just back from the beach on a small plot of level land was Laurence Crosbee's cabbage tree. As quickly as we could we moored the yacht, furled sails, and without waiting for breakfast we tumbled ashore armed with a pick and a spade. We estimated five feet from the palm and dug. It was hard work, for the sun was hot.

We had dug about a foot when we heard the beat of a motorboat engine and suddenly through the entrance nosed a large boat. We recognised the launch. It belonged to Joe Foster and Spud Laws (not their real names of course). We paused from our work as she came in. Standing for'ard to drop the anchor we saw Richards, the fellow who gave Donald the chart. Soon they were ashore looking at the hole we had started to dig.
﻿﻿﻿﻿"Just in time," said Laws with a laugh. Peter asked him what he meant, whereupon Foster said that they had come for their share of the gold as it was just as much theirs as ours. Furthermore they had waited for us in a nearby cove giving us time to start digging in order to see exactly where the gold lay. They wanted to be fair and were willing to split fifty fifty.

Peter said he'd see them in hell first and with that the fight was started. The fight was long and tough and in the end Foster and his two pals drew off to nurse their bruises. We were not unhurt ourselves and sat down alongside our hole to glower at our rivals. After resting Laws came up and said that they weren't going to budge until they had got a share. We told him to go to blazes and started digging. The time was now about eleven thirty. Suddenly we heard a crashing sound and a loarge boulder flew past Donald who was loosening the soil with the pick. We looked up the clif and saw Peter on top.

"Keep clear of that hole or else I'll roll some bigger bricks down," he yelled. With that he rolled a few more down to show us how. We felt wild, especially when we saw the grins (somewhat twisted) of Richards and Laws.
﻿﻿﻿﻿At this moment fate took a hand and the tragedy happened. The bounding boulders must have loosened the cliff for, with a roar that made the ground tremble, the side came down in a cloud of dust. A large stone caught me in the back as I turned to fly and knocked me into the water. Peter and Donald were to one side and were able to dodge away. Laws and Richards at the other end of the beach were safe.

But Foster we found half buried in the land-slide - dead. The tragedy sobered us. More earth was falling, so we returned with poor Foster's body to our craft in the launch's dinghy. Our dinghy was under the earth.

We hurried to Picton: the launch with the yacht in tow. On arrival we heard of the terrible earthquake that had happened in Napier at the same time as the landslide. We did not know until then that an earthquake had happened. Among the large toll of death of earthquake victims the inquest on poor Foster passed unremarked especially as we did not refer to the treasure.

So the gold still lies on Cooper Island buried deeper than Laurence Crosbee ever dreamed it would be.

(footnote. From the latest charts and maps Cooper Island is shown as Motungarara Island, and Cabbage Bay as Onehunga Bay.)


...And that's the article in full, including the footnote. Anyone fancy a treasure hunt??