Roydon Thomas was a draughtsman and boat designer based in Evans Bay and Mirimar. He was also well-known personality in the Wellington boating world in the 1950s and 60s. He came from a line of sailors; his father owned the well-known trading schooner Huia.

Thomas was a keen member of the Evans Bay Yacht and Motor Boat Club, and as a kid raced a P-Class there, winning the Wellington Championship 1945/46. In 1946, at the age of thirteen years, he sailed as crewman on board his father's yacht Ilex across the Tasman to compete in the second Sydney to Hobart race. He is arguably the youngest ever to have competed. Ilex was also the first NZ boat to compete in the race. Later on he raced Z class at Worser Bay

As a teenager he and three friends built the Athol Burns-designed (modified by Thomas) Almero. She was launched in 1952 and was a sister to the Christina, built after school and also launched in 1952. Christina sailed to Australia in 1956; at the time, the smallest boat to have done so.

Thomas trained as a draughtsman with the Wellington Harbour Board. His first design for a yacht was drawn up in 1954 - a 23 foot keel boat design. The design was favourably reviewed in Seaspray magazine, which predicted a good future for him.

Two were built - Shemara built by Frank Ballinger at his home on Grafton Road was, and is, a tank. Her deadwood is Jarrah, with inch-thick kauri carvel on birch ribs as 6 inch centres. Her transom is two inches thick. She has a lofty sail plan and you need at least 15 knots to get her going. Unless of course there is zero to two knots of wind, which will be just enough to get her moving, and the momentum of her weight keeps her moving. Shemara was launched in 1958 and raced with the Royal Port Nicholson Yacht Club, and cruised extensively in the Marlborough Sounds. I purchased her from Frank in 2007.


Thomas built for himself a sister to Shemara, the Gazelle, launched later the same year. Gazelle, though built to the same lines, was planked in cedar and carried no motor. She was very much the lighter boat, and in general airs up to 15 knots could sail rings around Shemara. She was painted red, and remained brightly coloured in red or blue through her life. She was renamed Reefer around ten years ago.

Gazelle was the winner of the longest Island Bay race on record at the Royal Port Nicholson Yacht Club. At a late stage of the race, all wind died out, leaving the fleet bobbing around. After some hours, as dinner time came near, each of the boats withdrew, either starting their engines or accepting a tow back to their respective berths; except the Gazelle, which had rum on board. Said rum was drunk, as the crew waited for a breeze which came in the next day. The race committee had to make the trip back to the clubhouse to get her finish time. After that, a new rule for abandoning races was created.

Gazelle and Shemara were neighbours in the Clyde Quay marina. Shemara is still there, one of the longest-term permanent tenants. Gazelle was sold to another Australian owner, who shipped her home about 2002.

Thomas' next keelboat design at 28 LOA was a beefed up version of the 23 footer. Again, two were built, the Charmaine and Ondine. Both of these boats have had their adventures. The Charmaine was racing from Wellington to Akaroa one year in a strong Northerly with the spinnaker up. The Northerly built, as did the seas, and it was time to bring the kite in and think about shortening sail. However, no-one had the courage to go forward, so the kite stayed up, and all expected the sail to break apart. It didn't, neither did the rig, and Charmaine ended up with a race record for her class.

The Ondine was built by John MacDermott and Phil Hartley at Hartley's home at Balaena Bay. Ondine was raced regularly, and later sold to make way for Hartley's next build, the Spencer-designed half-tonner Odette. Under new owners, Ondine got caught in a tidal rip and a lee shore on Wellington's Southern Coast and couldn't claw out. It was decided to run her aground in a more-or-less controlled situation. Ondine was run on to a beach in storm conditions, and all hands were saved. Ondine was dragged up the beach by a tractor and taken back to town. It is a testament to the quality of the build that after the ordeal, the only real damage was two sprung planks.

Thomas continued to design on spec and to commission through the 1960s, mostly work boats from dinghy size through to 47 foot trawlers. He also worked in commercial fishing. In 1967 he designed the 26 foot yacht Malaguena for his brother David, who sailed her over several years around the Pacific. In 1969 he designed and built the Westwind, a 28 foot Chatham dory type for his own use. La Panache, which is currently moored alternately in Clyde Quay and Picton, is a design of Thomas' although Phil Hartley told me she had been considerably altered during her build.

Stories of Roydon Thomas' life are legion. He had a reputation of a hopeless drunk. The "hopeless" aspect though is arguable, as his work maintained a high standard. He was however, a larrikin of the highest order. He is remembered by Phil Hartley's sons as always red-faced and genial. One story in particular can give an idea of the kind of escapade he got himself mixed up in. In 1966 he and several mates accidentally blew up a trawler in Evans Bay. The identity of the culprits was an open secret in the boating world, and his sister-in-law finally spilled the beans to a wider audience in 2007. Read about it here.

Roydon Thomas died by drowning in the Wellington harbour in 1971, aged 39. Special thanks to David Thomas for sharing some photographs and information. A book on Roydon Thomas' designs is in preparation. 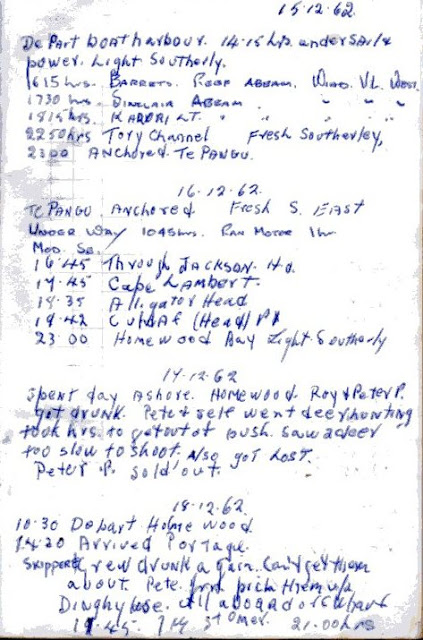